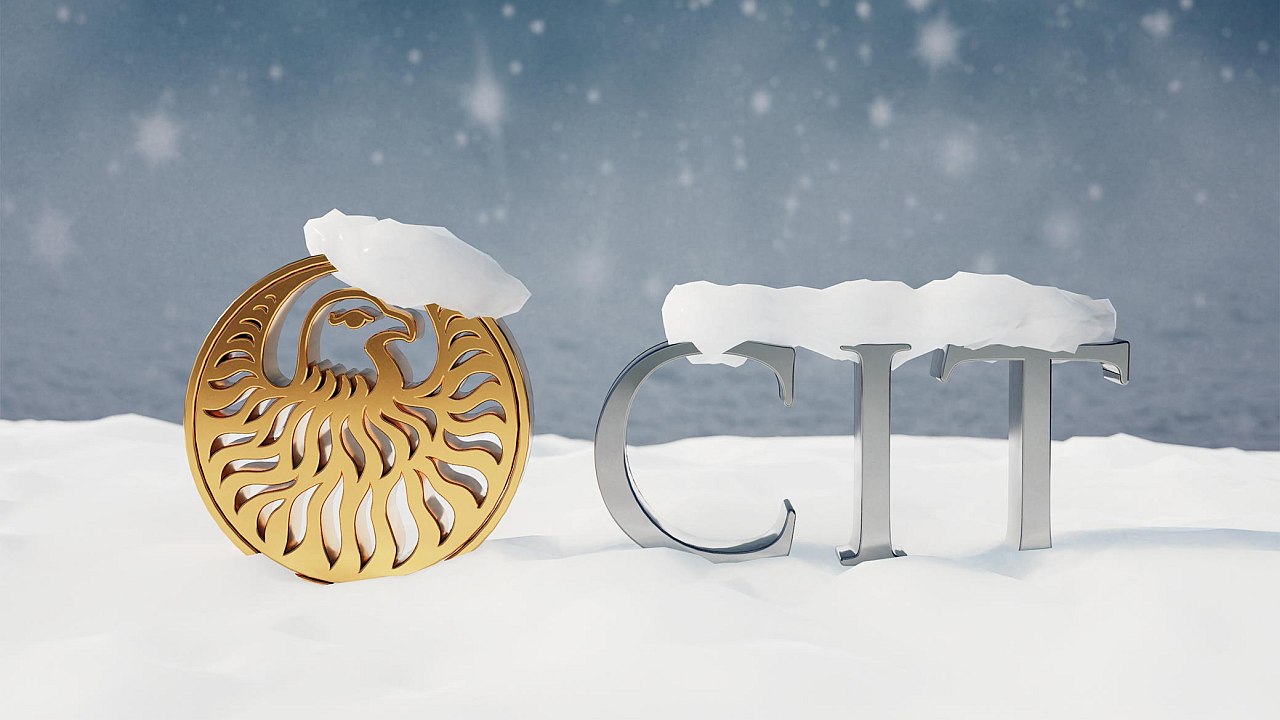 Love, Luck, Heroes, History and Nature. What an impressive variety. This is the CIT Winter Launch which covers an extraordinary wide range of more the 25 new releases.

What is your favorite? 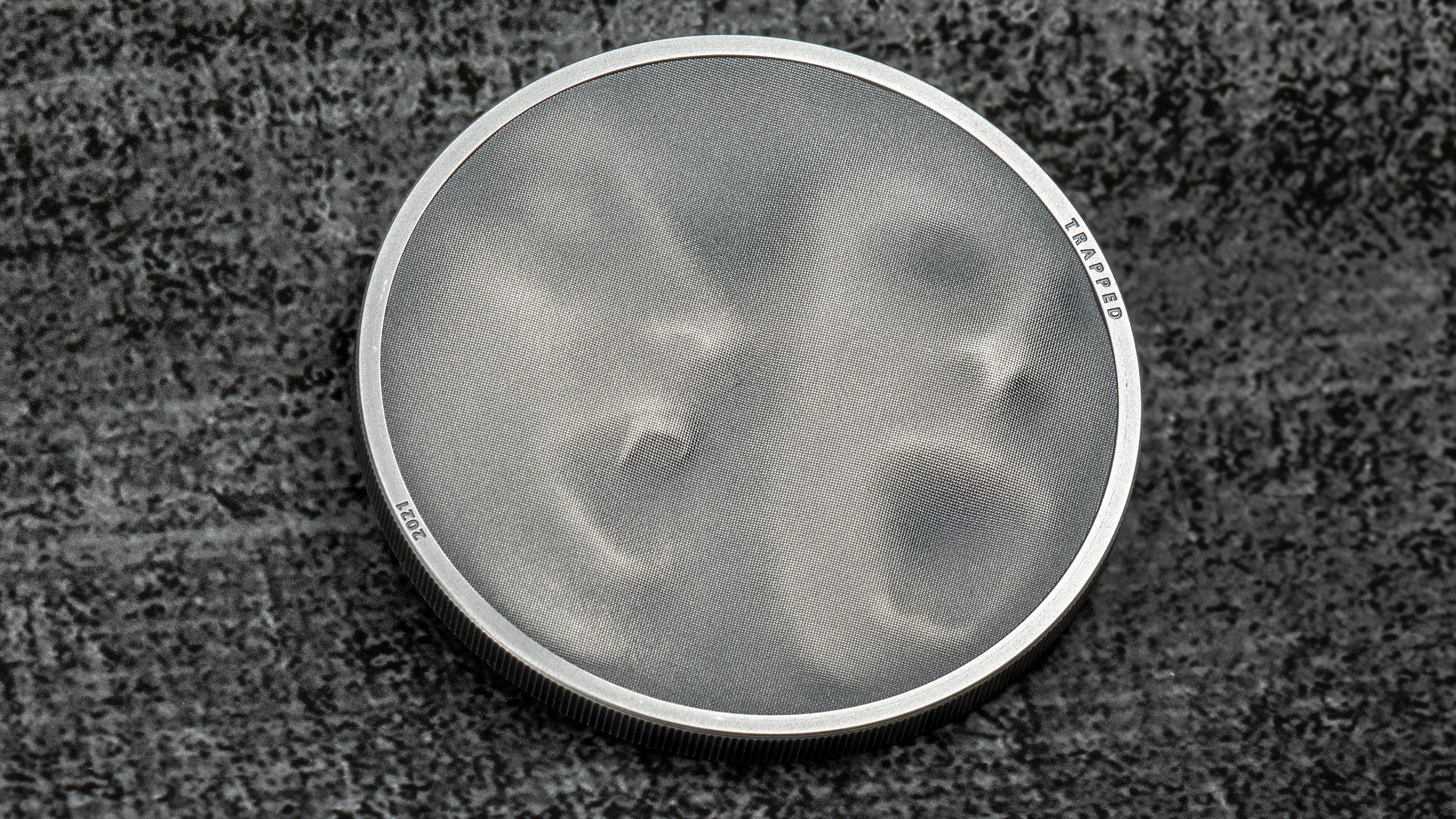 The story continues. And still we do not know who or what is behind the stretched fabric sheet – the curtain of fear. The breathtaking image enabled by the enhanced smartminting® technology makes us all witnesses to an oppressive and mysterious attack. Another great example of a highlight that is not defined by what’s added to the coin surface but by what lies beneath.

Forget about Netflix, grab your popcorn and secure yourself a place in the first row of your own scary numismatic story. 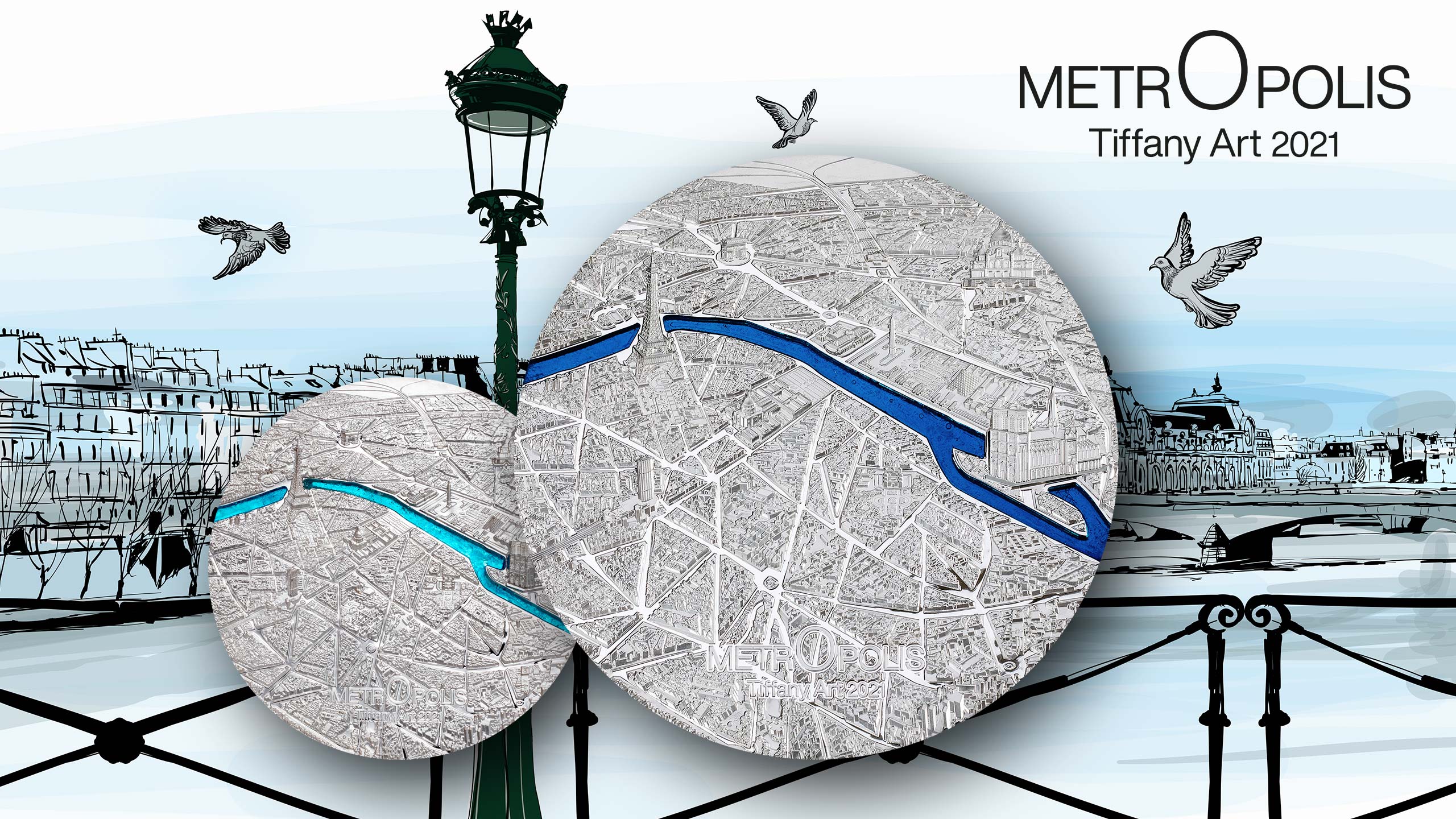 CIT is proud to introduce what we believe is a Quantum leap forward for this award-winning series! We are pleased to present Metropolis, a series to feature famous urban landscapes. The first city to be honored is the City of Love – Paris.

The reverse shows the French capital from a bird’s-eye view while the obverse pictures one of the most ornate and extravagant bridges of Paris, Pont Alexandre III.

The Tiffany Art glass that the series is known for is done in a completely new way as you see it wind through the city as a representation of the River Seine. The way the turquoise colored glass appears to literally divide the coin in half is a ground breaking achievement of numismatic technology! 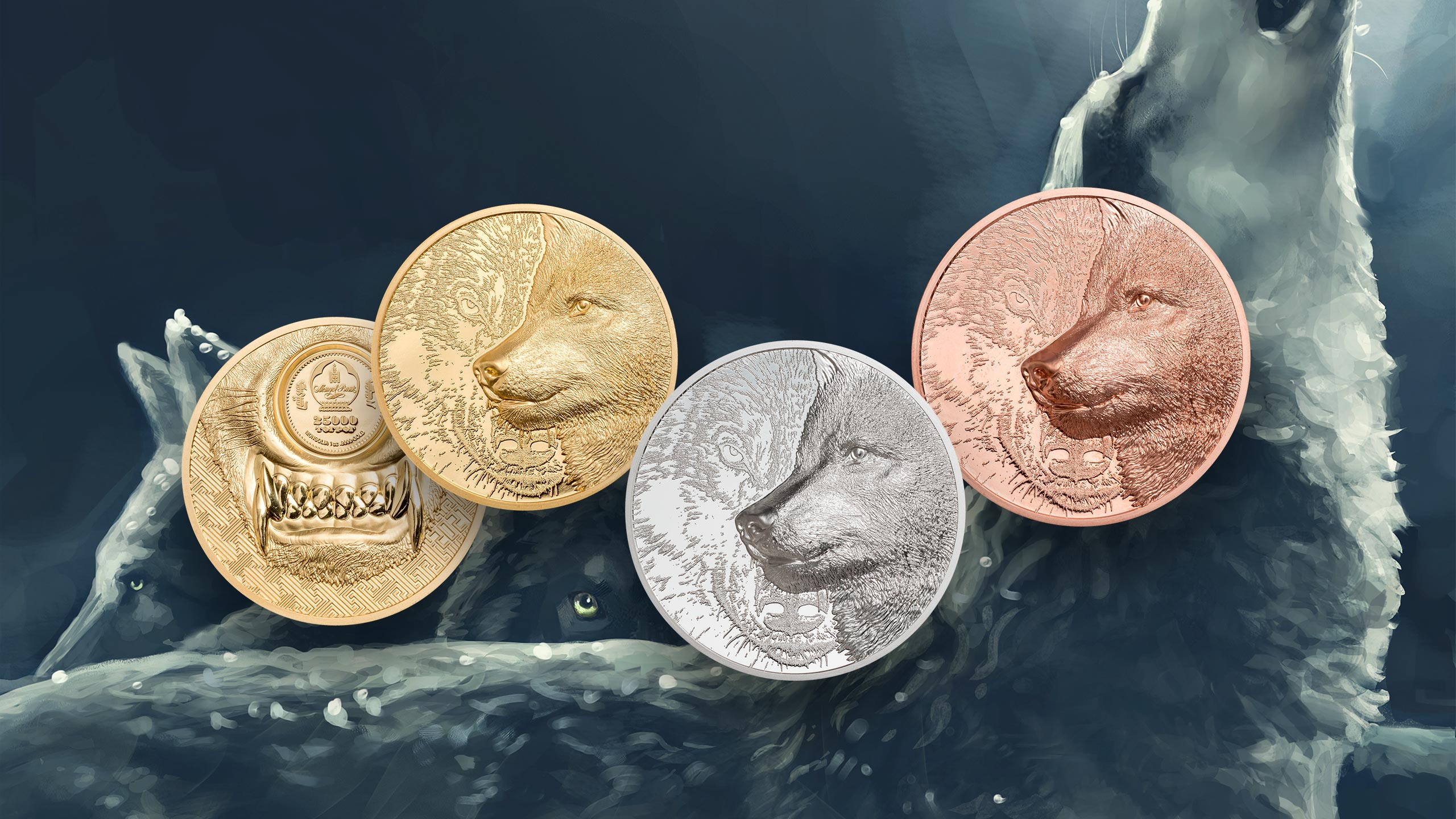 With the Majestic Eagle CIT launched its enhanced smartminting® technology at the WMF 2020 in Berlin. Now it is time to reveal the successor – the Mystic Wolf.

Wolves on one hand can be graceful and peaceful looking animals while on the other hand they can be ferocious killers that inspire fear with their snarling teeth. These two sides of the wolf are captured perfectly on these stunning coins. The reverse shows a front facing view and a side profile of a wolf in its calm state. The side profile view is struck in ultra high relief with an incredible amount of detail given to the fur and facial features.

The obverse is awe-inspiring and shows the snarling mouth of the wolf. His teeth are struck in ultra high relief and the spaces between are inset into the surface which provides an amazing contrast.

The range of coins include several specifications in Copper, Silver, Gold or Platinum.

Make your choice and catch your Mystic Wolf before it catches you. 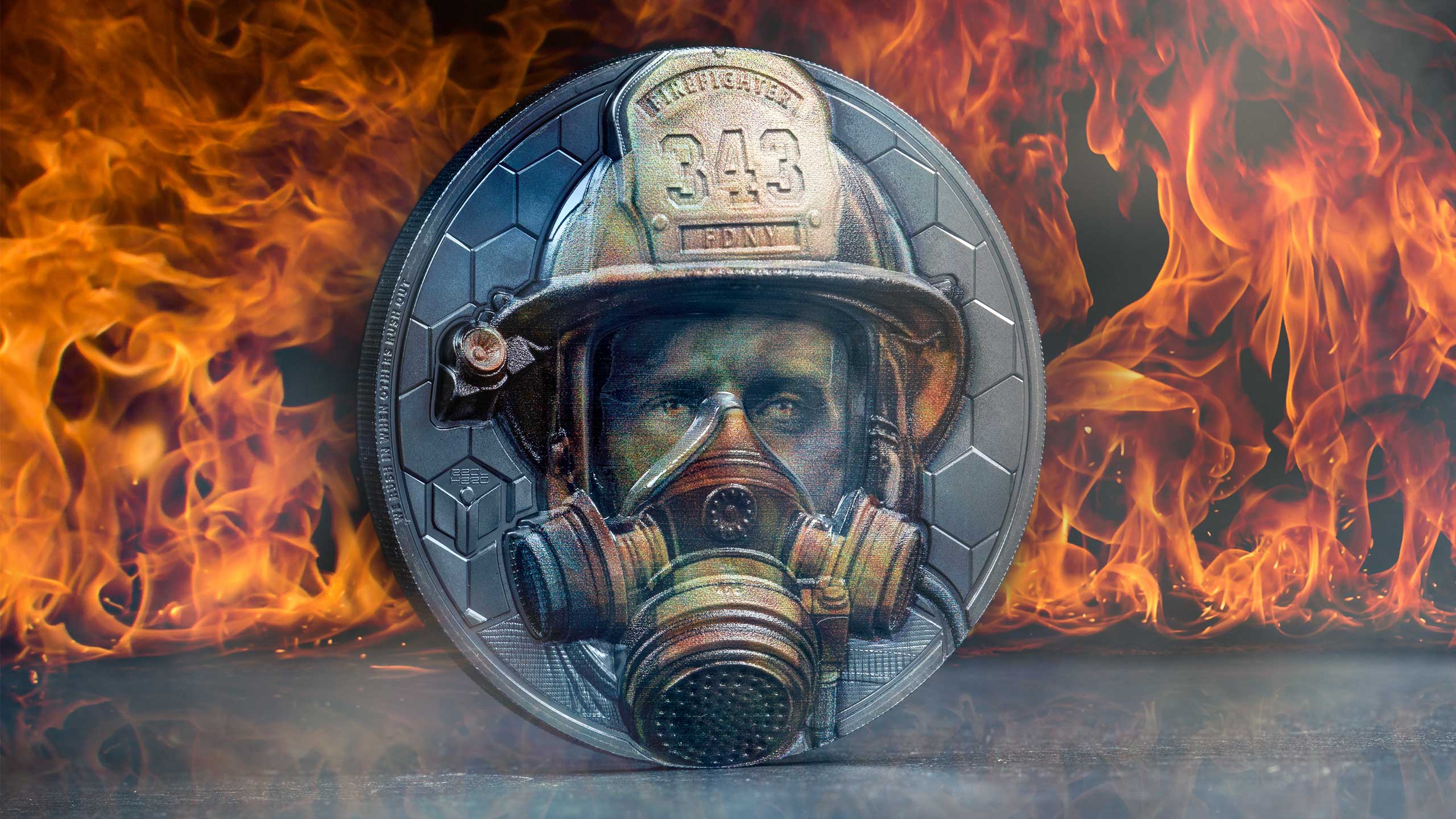 Nobody will forget the heroism of the Firefighter facing unimaginable circumstances during the 9/11 attacks. CIT is proud to honor this „Real Hero“ by presenting the most stunning coin ever done of the Firefighter. A tribute to not only those who gave the ultimate sacrifice during 9/11, but to all Firefighters that we count on to keep us safe.

This 3 oz Black Proof measures 50 mm in diameter and features a stunning, realistic image of a Firefighter from the New York City Fire Department. The number 343 on the helmet honors the Firefighters that were loss that day in the Twin Towers.

Thanks to the enhanced smartminting® technology the ultra high relief, partly polished honeycomb pattern and extremely detailed elements reaching to and even over the edge of the coin generate an unbelievable design. The visor that protects his eyes from the dangerous smoke and gases is a unique overlay that makes this coin even more special.

A mintage of only 911 will be struck. 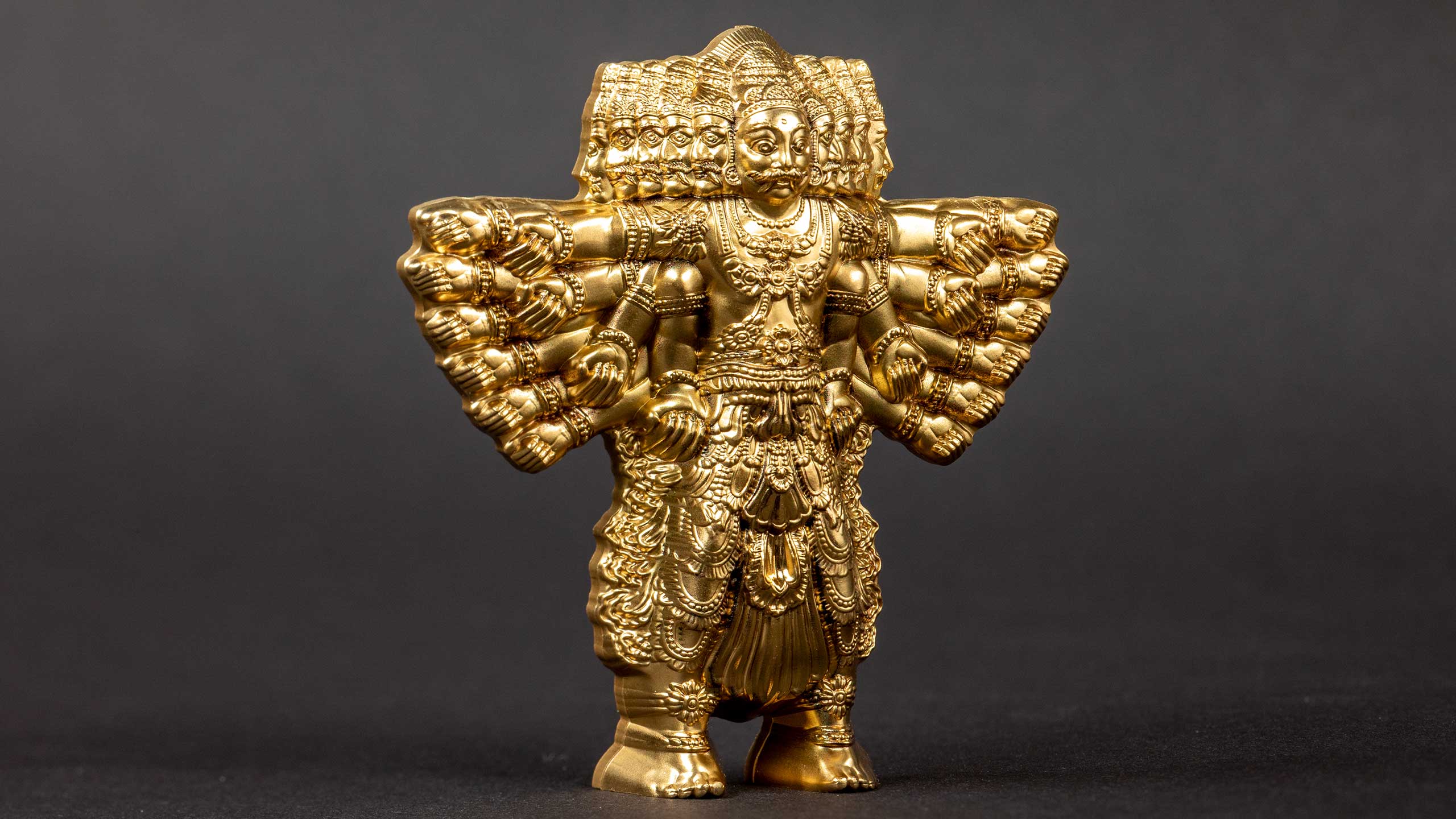 Last year’s Madonna of Bruges was a portrayal of noble virtues such as modesty and grace.

The 2021 edition has a much darker twist, dedicated to the very essence of evil in Hinduism – the King of Demons. Ravana, The Demon King, is the dreaded antagonist in the Ramayana, one of the oldest Sanskrit epics to date.

Thanks to the enhanced smartminting® technique you can now find this story on a special shaped fully gilded ultra high relief 3 oz silver piece. It is partially colored, individually numbered and limited to only 501 pieces world-wide. 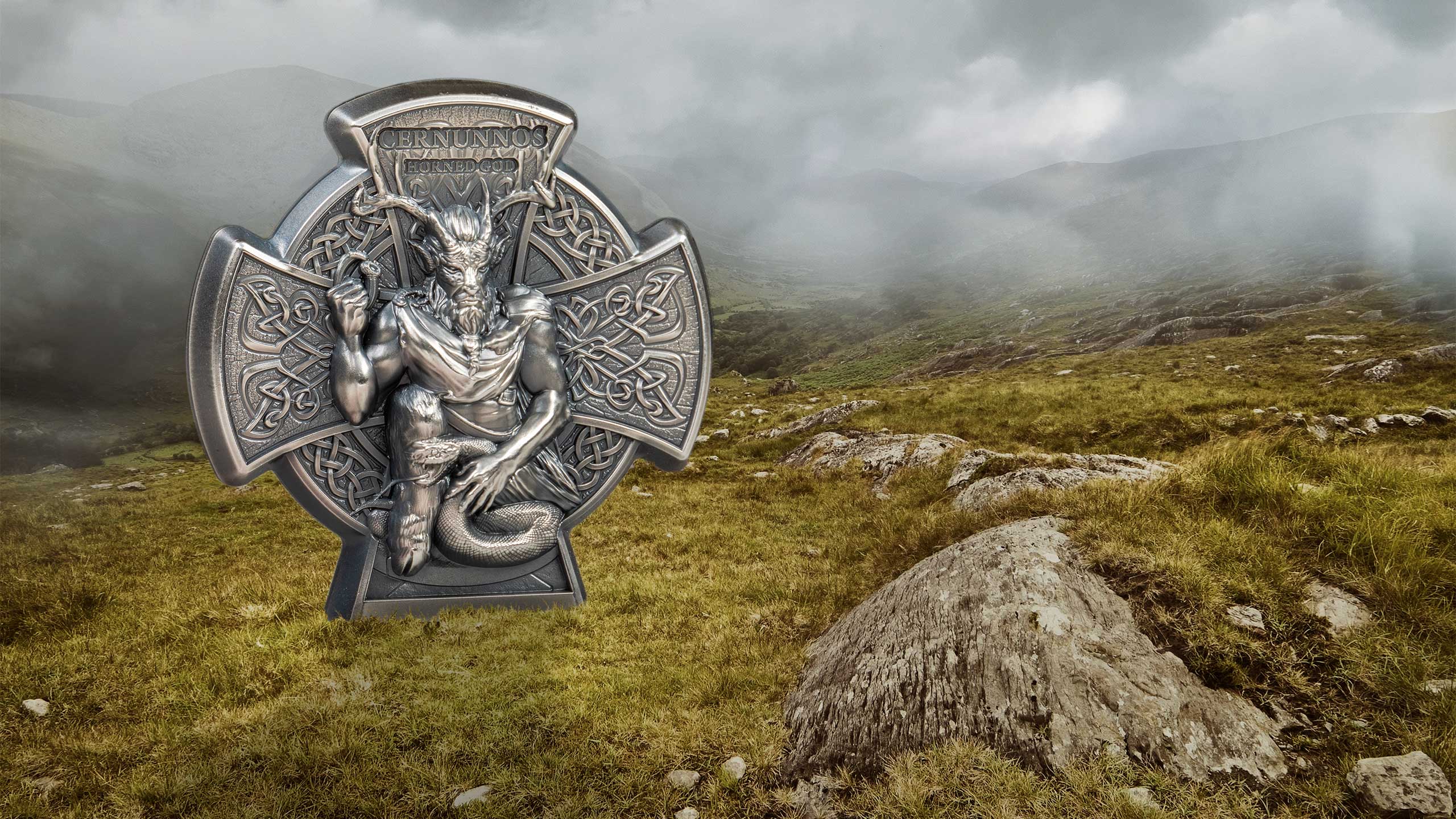 The third edition of the spectacular Isle of Man series shows Cernunnos on the ornamented Celtic cross.

The pagan god is portrayed like many imageries of the Gallo-Roman period with human torso, stag’s feet and mighty antlers. He is accompanied by a snake and holds a torque, which is a sacred neck ornament of Celtic gods and a symbol of source of power and wealth. In Paganism, he is an archaic and powerful deity who is also worshipped as the „Lord of Wild Things“.

This impressive 3 oz in Antique finish is limited to 999 pieces and a perfect example of what is possible with the enhanced smartminting® technology. 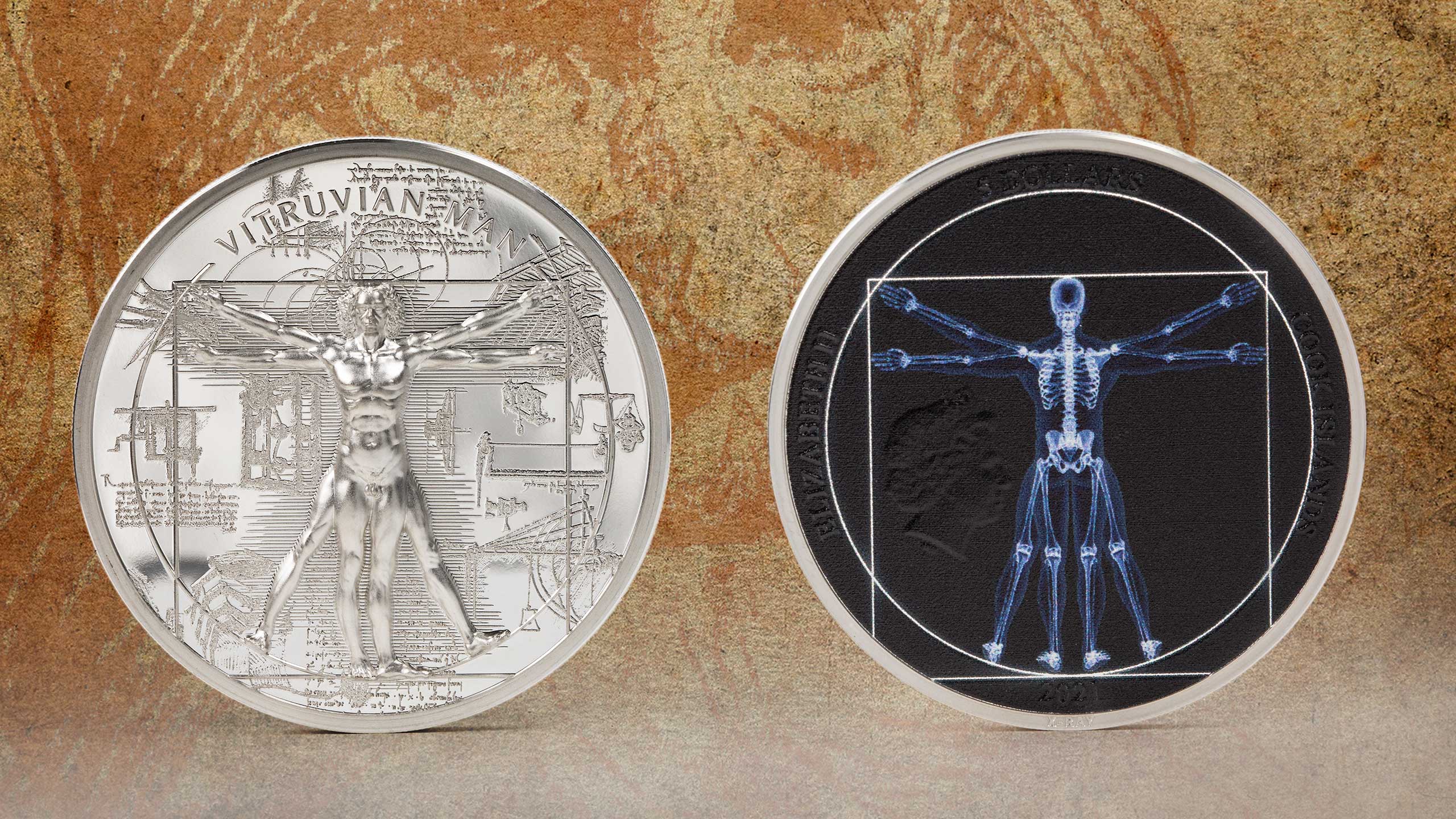 The Vitruvian Man is a drawing made by Leonardo da Vinci in 1490 accompanied by notes based on the work of the Roman architect Vitruvius. It represents da Vinci’s concept of the ideal human body proportions and is kept in the Galleria dell’Accademia, in Venice, Italy.

Let’s talk about a much more modern invention done by Wilhelm Röntgen in 1895 – the X-rays. He discovered their medical use when he made a picture of his wife’s hand on a photographic plate formed due to X-rays.

CIT now takes this historic artwork of da Vinci and combines it with the essential modern invention of Röntgen. The result is a 1 oz silver Proof mixing both ages in one coin!

Discover the Vitruvian Man in ultra high relief surrounded by historical sketches and notes on the reverse and his colorized X-ray image on the obverse. There will only be 999 of these amazing Proofs struck.

Get yours and hold 400 years of history in your hand! 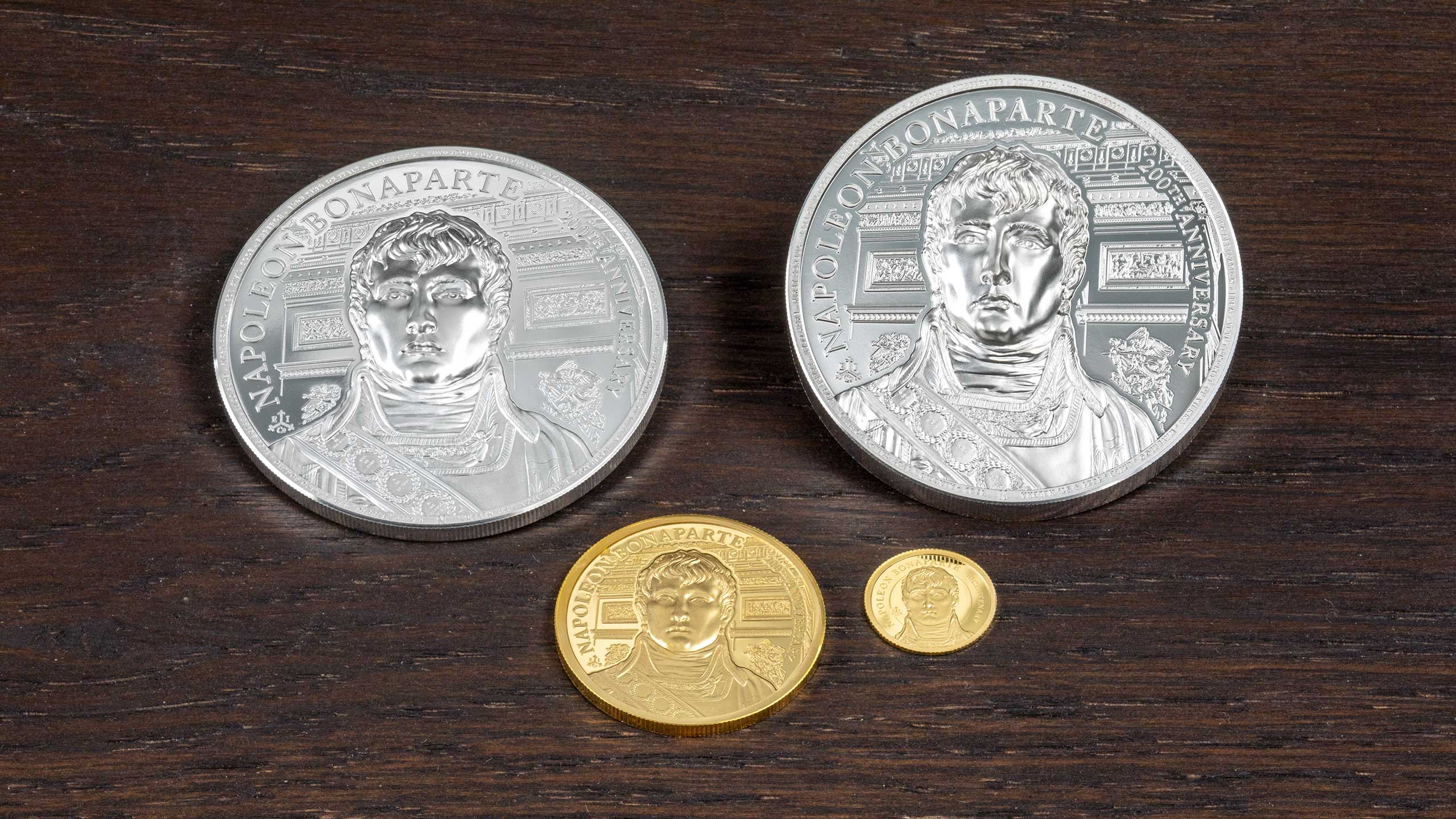 This unique and special edition of Napoleon coins is a fitting tribute to the 200th anniversary of his passing. Very few leaders in world history have had such an impact. What would the world look like if he would have won at Waterloo?

These coins are issued by the island of Saint Helena. Saint Helena is a British territory located in the South Atlantic Ocean 1870 km away from the coast of South Africa. It is here where Napoleon spent the last 6 years of his life living in exile.

The coins show designs that capture a youthful Napoleon in Ultra High Relief detail, quite different than the traditional images that exist. His strong features as well as his aspiring expression on his face hints at the extraordinary future he will eventually have.

The range of coins include several specifications in gold and silver. 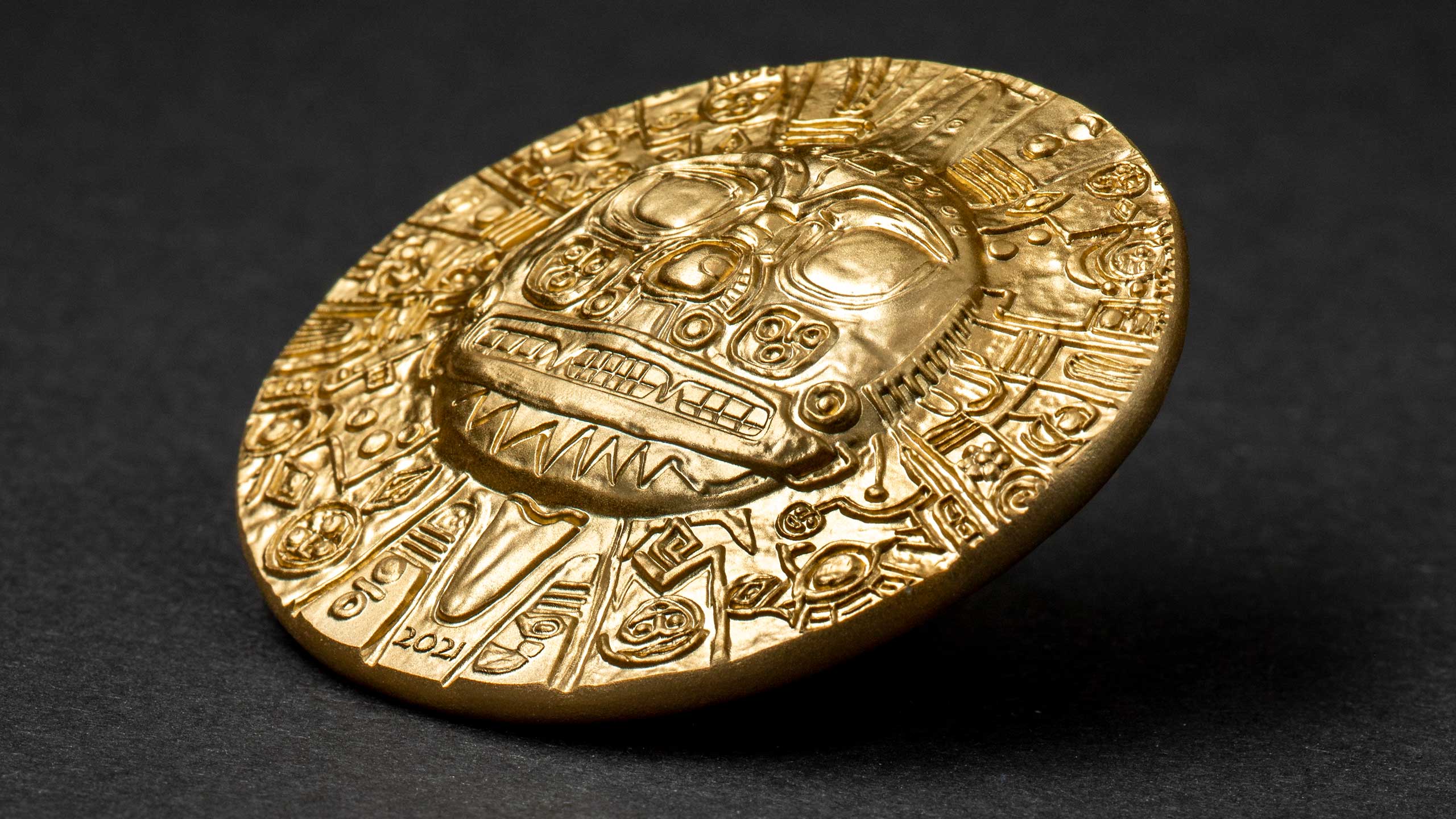 The gold sun disc was one of the most sacred and valuable artifacts of the Inca. It was three feet wide, made of rare translucent gold and was said to have magical powers. The Inca believed it could heal any injury, stop time, prevent earthquakes and be used to receive information directly from the Sun God.

The golden disc has many theories as to how it went missing. The most popular theory of historians is that it was saved by the Inca people and taken to another Inca city. Others say it was moved to Lake Titicaca where it remained hidden beneath the waters, in a subterranean temple.

CIT has used its enhanced smartminting® technology to create a stunning 1 oz gilded silver version of the sun disc. The silk finish gives it an ancient look with a ultra high relief domed face on the reverse. The irregular design is faithfully captured on this piece and the coat of arms on the obverse is set into the inverted dome that helps give this piece its stunning relief.

With this coin you might be able to talk directly to the Inca Sun God yourself. 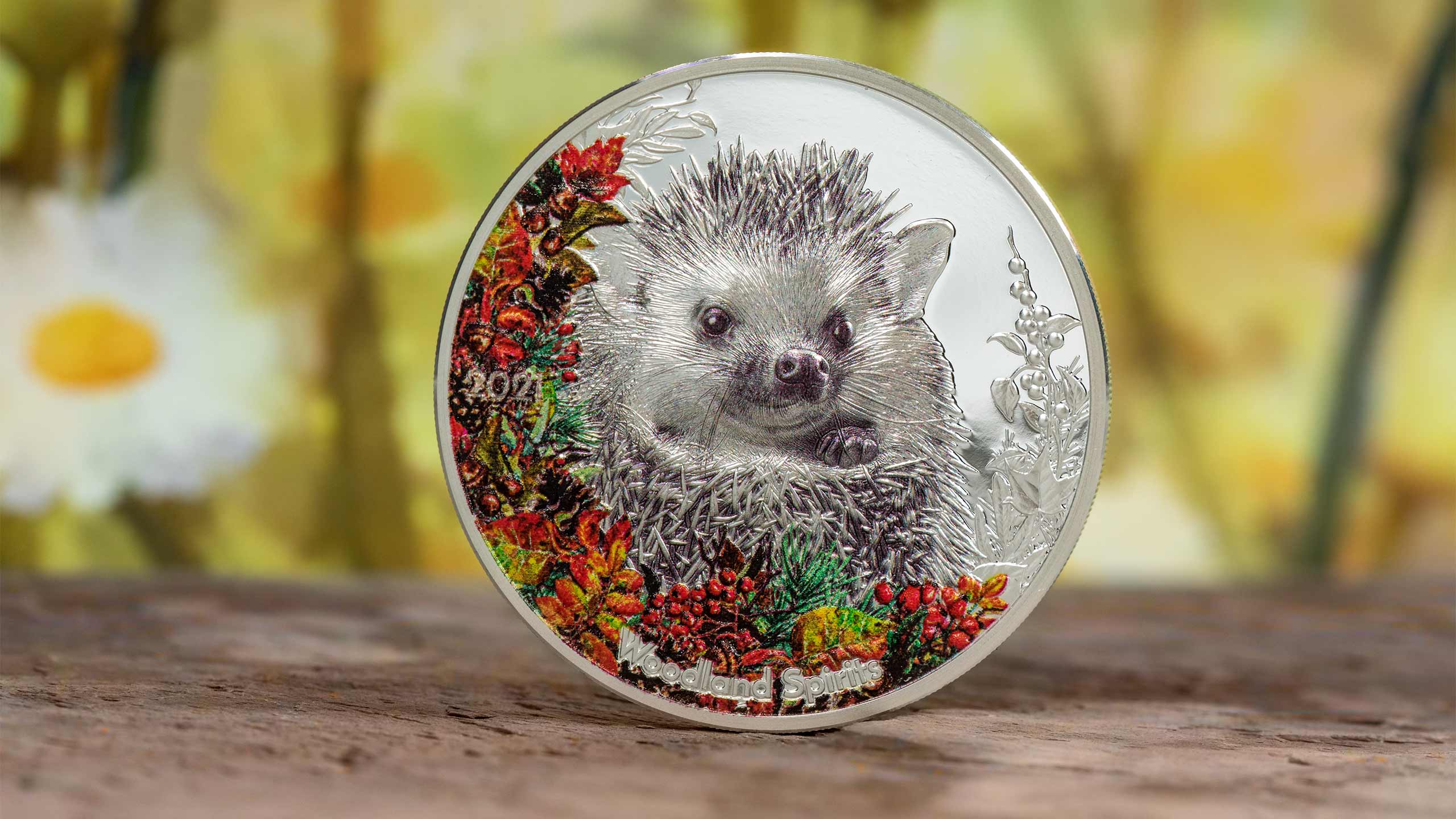 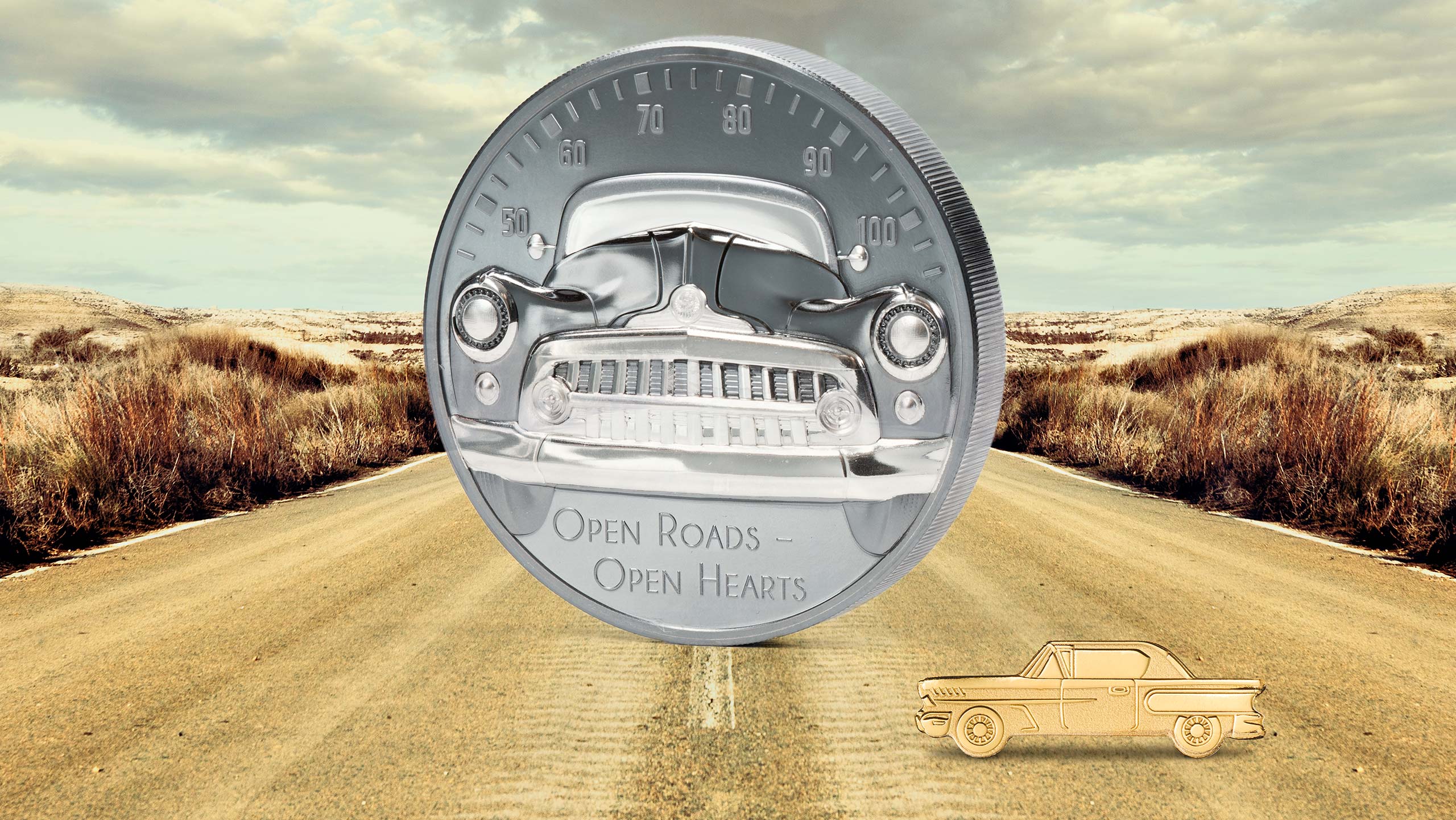 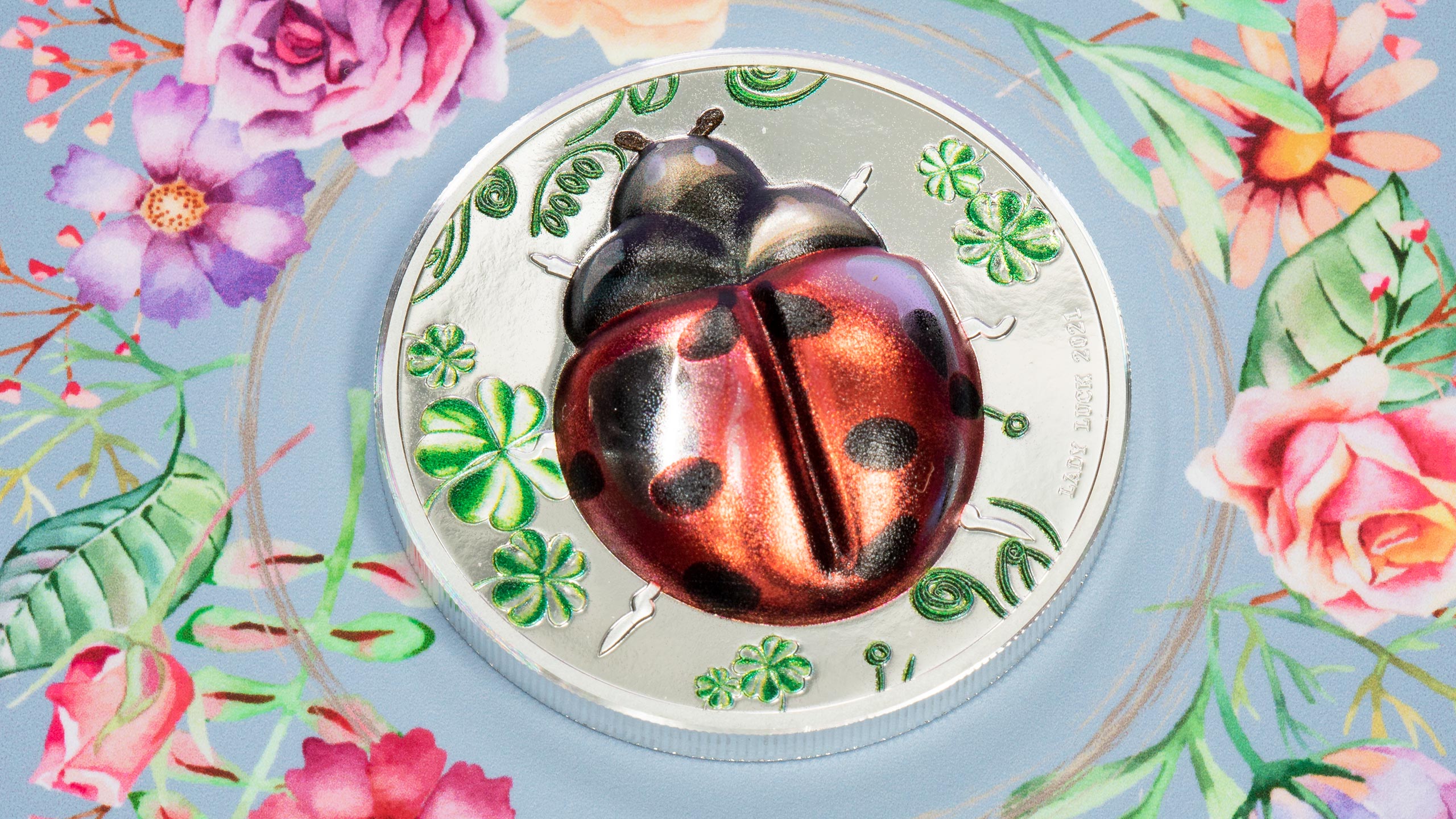 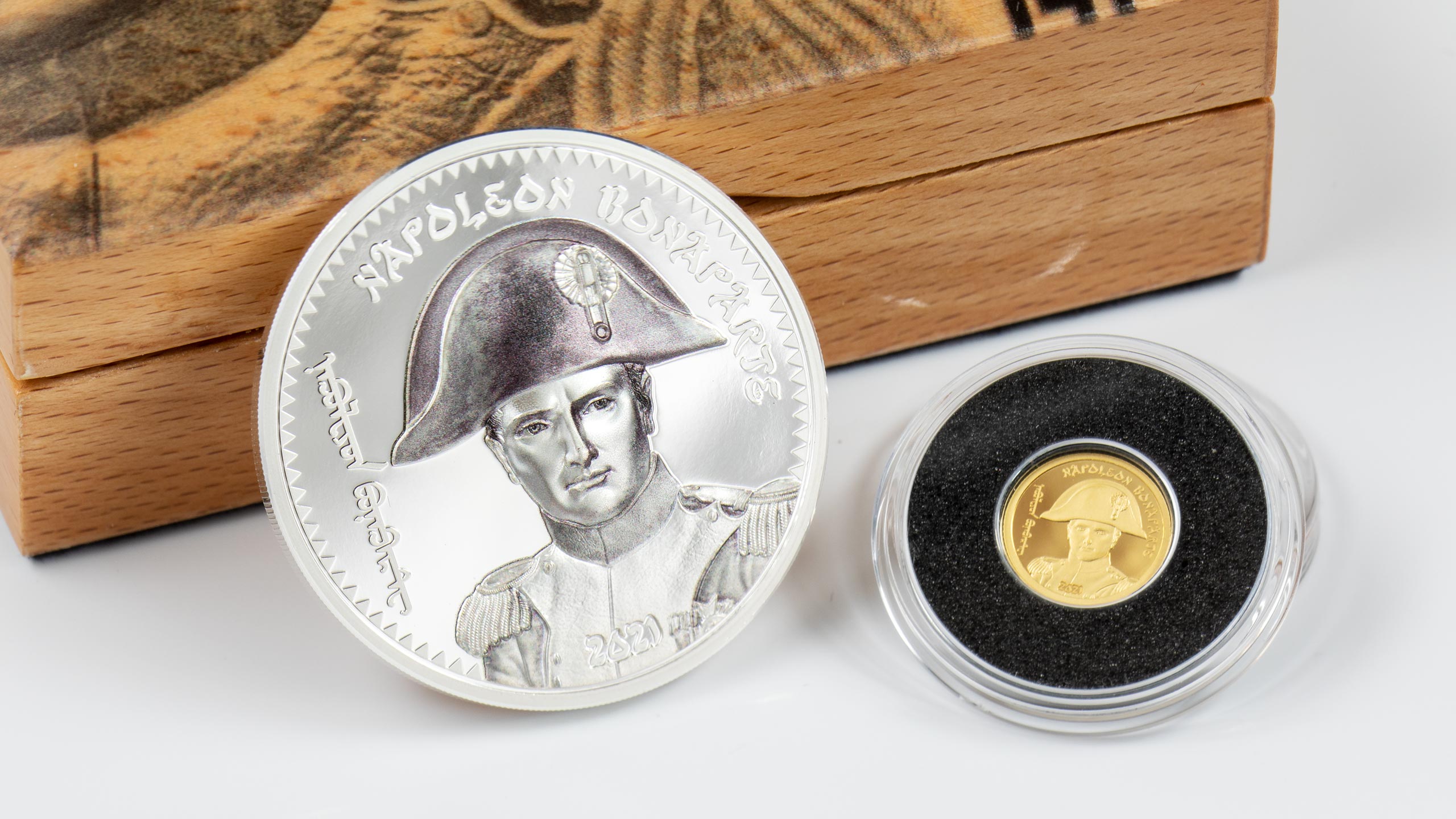 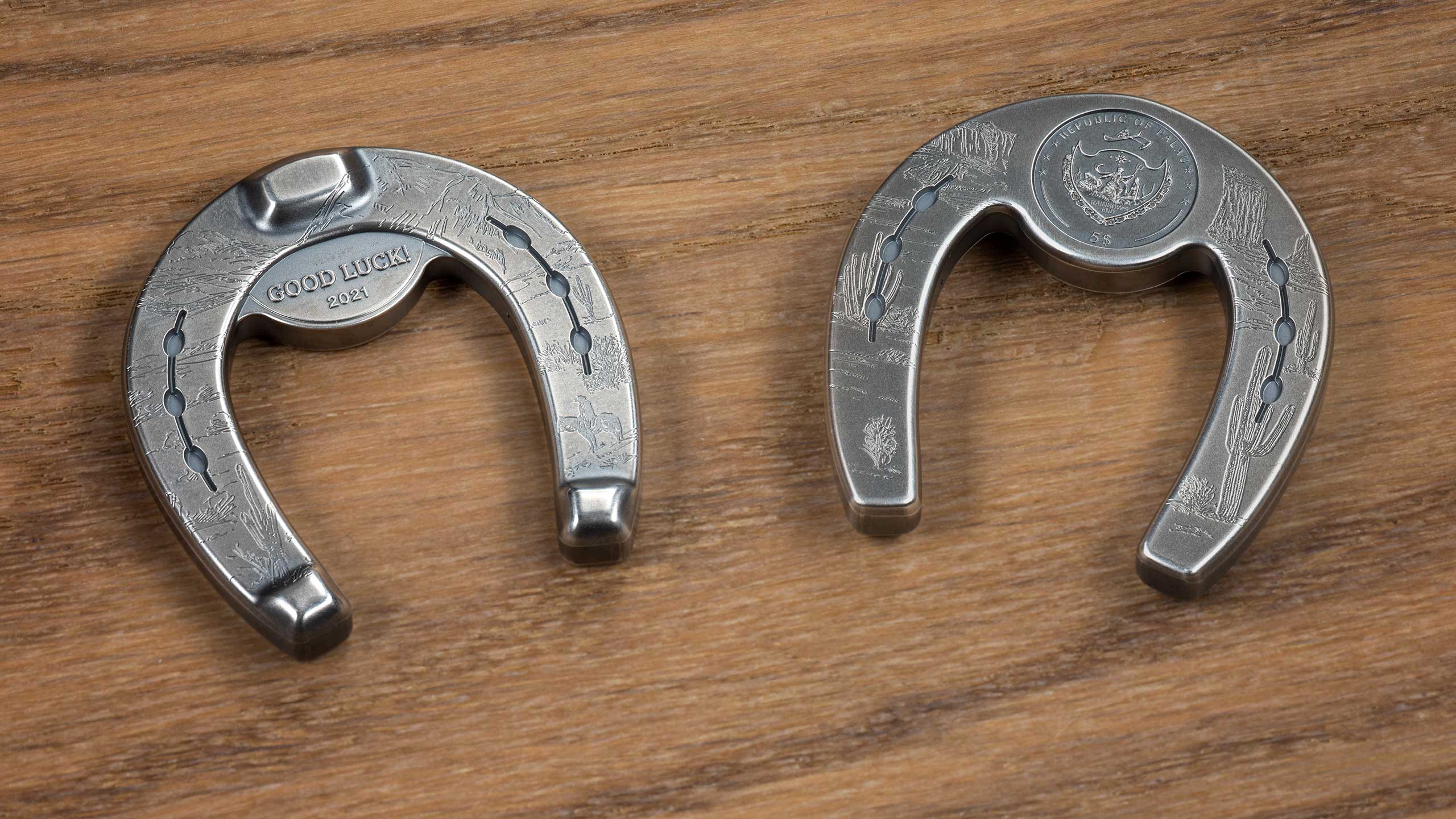 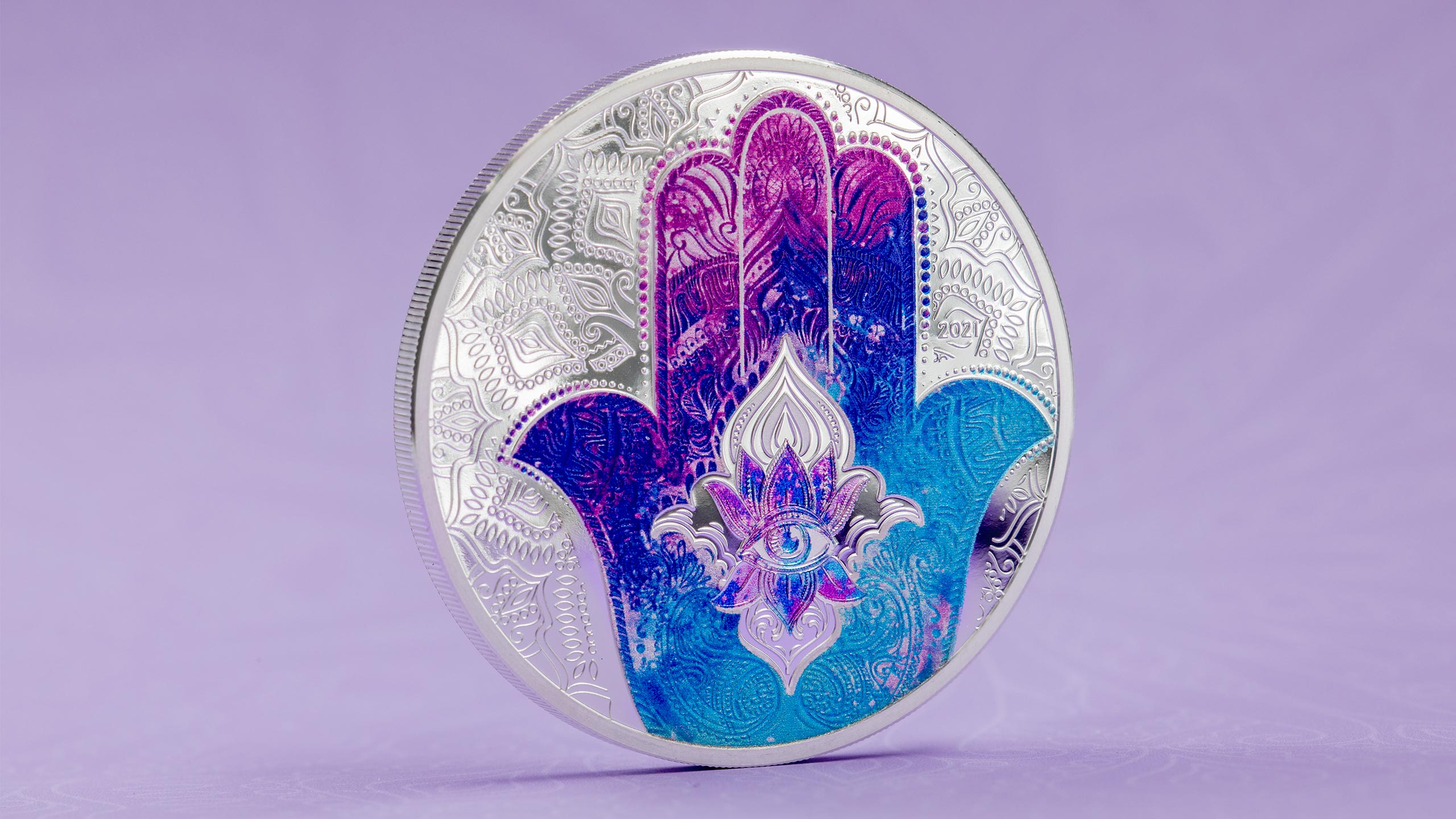 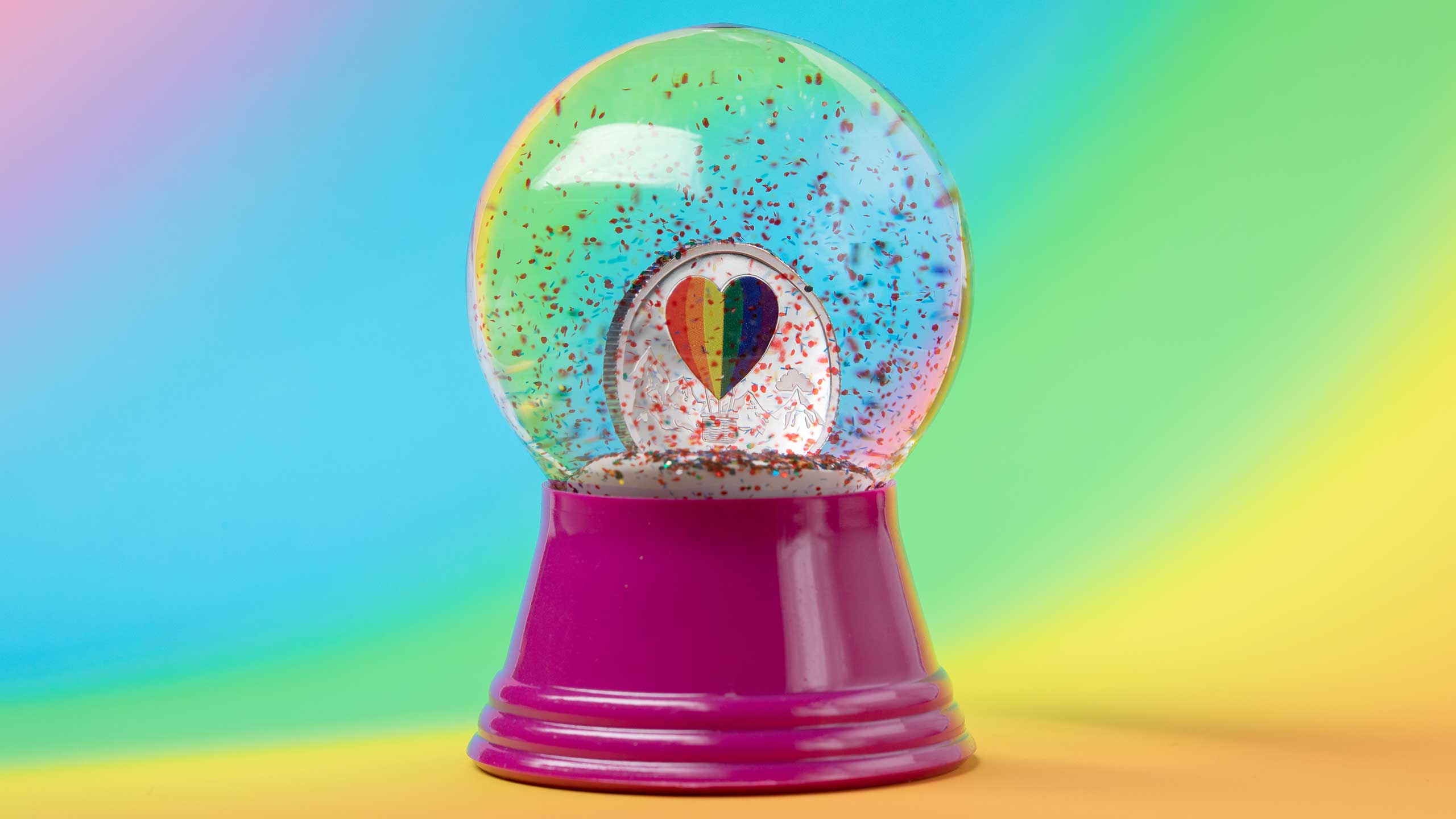